I frequently use Veinoplus in professional football players. I often use it when players have an external muscular trauma: this devices enables to drain the consecutive edema. Veinoplus is also useful for relieving of joint effusion : when placing the electrode on the muscular group, the affected joint is drained. I also recommend it to […]

Following the studies carried out by INSEP, I started using Veinoplus Sport for recovery in athletes after “lactic” workouts. Quickly, they have been convinced by the device’s benefits for recovery. Today, most of the French team’s paddlers use Veinoplus sport after intense trainings or between races during international events. They use it on calves for […]

I discovered Veinoplus technology when I was a cyclist, and I was convinced from the start. Very small, you can use it in a car, on a plane, in front of your computer or your TV. The single program of this device is a strong point, as it is really easy-to-use yet efficient. Applied on […]

Since two years, French Basketball Team men players could benefit from Veinoplus Sport, especially during the 2013 Euro campaign. Thanks to its simplicity of use, we gave one device to each player, since the preparation until the end of the competion in Slovenia. In general, Veinoplus was applied at the end of the day, during […]

I recommend using Veinoplus in several situations : between trainings, during competitions AND during transport. At our first preparation stage in Cuba, I asked my team to use Veinoplus during the flight, in order to efficiently start the workout as soon as the arrival. They were also told to use it immediately after trainging sessions […] 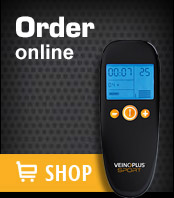